Famous for their mastery of ancient maritime navigation and shipbuilding, the Phoenicians were likely the first to survey the Mediterranean Sea, creating the beginning of the modern field of geography. 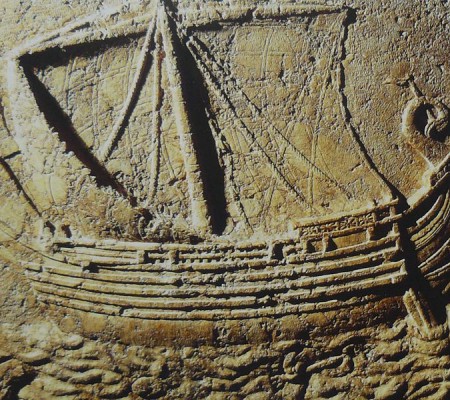 Phoenician ship carved on the face of a sarcophagus.

(Photo credited to Elie plus at en.wikipedia)

Famous for their mastery of ancient maritime navigation and shipbuilding, the Phoenicians were likely the first to survey the Mediterranean Sea, creating the beginning of the modern field of geography, and they were the first Mediterranean people to venture past the Strait of Gibraltar into the Atlantic Ocean. Their ships were designed and built with the best techniques available.

The Phoenicians were masters of many different skills and trades. First, Phoenicia was known as the birthplace of the alphabet that forms the basis of many modern Western languages. The Phoenicians were also excellent glass makers, and produced rare purple dyes and various other luxury goods for trade throughout the Mediterranean world. Given the demand for their trade goods, the Phoenicians became adept in the maritime arts, and are often noted in ancient histories as masters of trade and shipbuilding.

The Phoenicians built two major types of ships. Trading ships known as gauloi, or “round ships,” were built with rounded hulls and curved sterns. The gauloi had a giant rectangular sail in its center, which hung from a yard and could turn to catch the wind. It used an oar-like blade, attached to the port (left) side of the ship, to steer. Storage, as well as space for the crew, was near the rear of the ship in the quarterdeck. Phoenician warships were slightly different; they were longer and narrower than cargo ships, in order to hold large numbers of people. The Phoenician warship carried two sails and coverings on the deck to hide officers. At the bow (front) of the ship was the forecastle, an area that was used by bowmen or catapults during battle. The military ship was equipped with a “rostrum,” a bronze tip fitted on the bow of the vessel in order to ram other ships.

Phoenician ships were decorated with various carvings and paintings. These included eyes that were intended to help the ship “see” and to frighten enemies, as well as horses’ heads to honor their god of the sea, Yamm. Phoenician-style ships were so advanced that they were even used after their empire had faded. Both the Greeks and the Romans used similar designs in their own fleets. Not only did the Phoenicians design great ships, but they also created many new navigational tools. These innovations helped the Phoenicians to maintain their sea power for centuries. Phoenician ship carved on the face of a sarcophagus. A map of the Phoenician trade routes