He led the first circumnavigation of the world, and is considered the first European to cross the Pacific Ocean Introduction
Ferdinand Magellan is known for circumnavigating – sailing around – the world. From Spain he sailed around South America, discovering the Strait of Magellan, and across the Pacific. Though he was killed in the Philippines, his ship the Victoria continued westward to Spain, accomplishing the first circumnavigation of the globe. But in some cases, his journey was filled with more than he would bargain for. Magellan’s story is filled with war, storms, mutiny, and hostile native encounters.

Biography
Early Life
Ferdinand Magellan was born in 1480 in Portugal; the exact city is unknown. Many believe it was either Porto or Sabrosa. Ferdinand Magellan is the English version of his name. In Portuguese, his name is Fernão de Magalhães. He came from a noble family. His father was Rui de Magalhães and Alda de Mesquita. Young Magellan was a page in the royal court for the queen of Portugal. Here, he would learn helpful skills such as hunting, fighting, and he would have learned about the stars.1 His father often traveled to a town called Oporto (also spelled Porto). The harbor here was crowded with shipping and seafaring travelers with tales of adventure. It is possible that Oporto is where Magellan found a love for the sea and exploration.2 But Ferdinand Magellan was not always an explorer. He began his career as a soldier in the Portuguese navy. He left Portugal in 1505 and sailed to India under the command of Francisco de Almeida. They were sent by King Manuel I to break Muslim sea power in India and Africa.3 Magellan left Lisbon on March 25, 1505. He would travel and fight in several battles over the next few years.

In 1506, Magellan traveled to the East Indies (modern day Indonesia) and joined expeditions to Spice Islands (also called the Molucca Islands). In February 1509, he took part in the naval Battle of Diu, which marked the decline of Ottoman (modern day Turkey) influence in the area. The Portuguese now had dominance over most of the Indian Ocean. He returned to Lisbon in 1512. A year later, he went to Morocco in Northern Africa where he fought in another battle. During the battle, Magellan received a serious wound that would cause him to walk with a limp for the rest of his life.4 Also while in Morocco, Magellan was accused of stealing. He was proven innocent, but the incident ruined his reputation with the Portuguese king. Magellan wanted to command a voyage to the Spice Islands. He believed he could reach them by sailing west. When he returned to Portugal, he petitioned King Manuel I three times to let him go. The King refused each time. Ferdinand Magellan then went to King Charles I of Spain. The Spanish King agreed to sponsor what would become Magellan’s great voyage around the world.

Voyages
Principal Voyage
By the end of October 1517, Magellan was in Seville, becoming a Spanish citizen. King Charles I funded Magellan and he set sail September 20, 1519 with a fleet of five ships and roughly 200 men. The five ships were: the Trinidad, captained by Magellan; San Antonio, captained by Juan de Cartagena; Concepción, captained by Gaspar de Quesada; Victoria, captained by Luis de Mendoza; and the Santiago, captained by Juan Serrano. They stopped at the Canary Islands to pick up some supplies, and then continued into the Atlantic Ocean. Magellan received a letter that the Spanish officers planned to kill him after leaving the Canaries. Magellan remained on guard for his life throughout much of the trip. They sailed for several weeks, and by November 20, they crossed the equator into the southern hemisphere.5 In December, they stopped at Guanabara Bay in southeastern Brazil to resupply once again.

Magellan’s fleet continued on down the coast of South America. He was searching for a passage that connected one ocean to the other. As their journey went on, life at sea became difficult. Food and water became rationed, and the crew was not happy. On April 1, 1520, while at Port St. Julian, the three captains Cartagena, Mendoza, and Quesada called their crews to mutiny.6 The mutiny was crushed by Magellan. Mendoza had been killed during the mutiny. Quesada and Cartagena were found guilty of murder and treason. Quesada was beheaded for his crime, while Cartagena was left marooned – or stranded – on land when the fleet left.7 The fleet traveled onward. While near Santa Cruz, the Santiago wrecked while on a scouting mission. They continued south and on October 21, 1520 he finally found the passage they were searching for. Shortly after entering the passage, the San Antonio deserted the mission. On November 8, 1520 the Trinidad, Concepción, and Victoria reached the “Sea of the South.”8 Today we know it as the Pacific Ocean. This passage at the tip of South America that Ferdinand Magellan had found would later be renamed the Strait of Magellan.

Subsequent Voyages
Ferdinand Magellan had problems along the way, but he had finally reached the Pacific Ocean. Once through the strait, Magellan continued northward up the coast of Chile. In March the reached the island we now know as Guam. Here, they found and ate fresh food for the first time in 99 days.9 Having found a route through South America, Magellan was still determined to reach the Spice Islands. He and his fleet continued west. Along their course, they noticed a constant flow of wind. This air provided steady winds to their back which was very helpful to their sailing. Magellan and his crew had unknowingly discovered “trade winds.” The name would come from the important role they would later play in transoceanic trade. Their journey continued until they reached the Philippines in March of 1521. By this point, Magellan had endured a somewhat difficult yet successful journey. But his luck would not last much longer.

Later Years and Death
Throughout the Philippine Islands, Magellan and his men regularly interacted with the natives. At Cebú, The native chief, his wife, and several of the natives were baptized and converted to Christianity. Because of this, Magellan thought he could convince other native tribes to convert. But not all interactions with the natives were friendly. Chief Datu Lapu Lapu of the Mactan Island rejected conversion. So Magellan took a group of about 60 men to attack Mactan. The Mactan’s had about 1500 men. On April 27, 1521, Ferdinand Magellan was killed during battle on the Philippine Islands. The Trinidad and Victoria soon made it to the Spice Islands. The Trinidad needed much repair. So the Victoria, captained by Juan Sebastian Elcano continued on.On December 21,1521, the Victoria sailed across the Indian Ocean to Spain. September 6, 1522, they arrived with only 18 men at Sanlúcar de Barrameda on the coast of Spain.

Legacy
Although he died in the Philippines, we recognize Ferdinand Magellan as the first European to circumnavigate the globe. He fearlessly commanded a fleet of ships, one that completed the journey in his name and honor. Several discoveries were made along the way. The Strait of Magellan, off the southern coast of South America, became an important navigational route. His discovery of the trade winds ranks among his most useful and major findings.10 The expedition gave Europeans a much better understanding of the extent of the Earth’s size. Much of what we know of Magellan’s journey came from Antonio Pigafetta. A crew member of the famed voyage, Pigafetta kept a first hand account of the voyage. He and his story survived the journey around the globe, and his account later was translated. Magellan had set out with a goal to discover a Western sea route to the Spice Islands. What he helped prove, however, is that the world is indeed round, and much bigger than Europeans previously imagined. 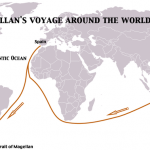 Magellan’s Voyage Around the World

“Death of Magellan,” Columbus and Columbia: a Pictorial History of the Man and the Nation Embracing a Review of Our Country’s Progress, a Complete History of America, a New Life of Columbus and An Illustrated Description of the Great Columbian Exposition, 1892, From Library at The Mariners’ Museum, E178.C7.